Does serious illness increase the risk of developing PTSD?

We wrote about this topic back in 2011. At that time, a study in the Journal of the American Academy of Orthopedic Surgeons reported that 20-51% of patients who suffered musculoskeletal injuries went on to develop PTSD.

Another study, from the Journal of Psychosomatic Research, found that 36-45% of the 121 ovarian cancer survivors in their longitudinal study experienced PTSD at some point between the start of their chemotherapy treatments and their 3-month post-treatment follow-up appointment.

Overall, that’s a lot of patients developing PTSD after undergoing treatment for illness or injury. 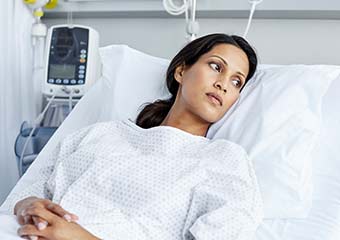 Given the amount of time that has gone by, and since this is an important topic for practitioners, I wanted to update you with some new findings.

In May 2015, Critical Care Medicine published a metaanalysis conducted by Ann M. Parker, MD and a team from Johns Hopkins School of Medicine. Their survey found that, at 1-year post-hospitalization, PTSD symptoms remained present in 20% of critical care survivors.

Parker and her team arrived at this figure after reviewing 40 articles that represented a combined total of 4,260 participants. Articles were screened to include only studies that evaluated adult nonspecific participants, measured PTSD symptoms using a validated instrument at least 1 month post-ICU, and contained at least 10 patients.

In another study, also conducted at Johns Hopkins, a team led by Joe Bienvenu, MD looked at co-occurrence between general anxiety, depression, and PTSD symptoms. They looked specifically at co-occurrence at 2-year follow-ups for people who had been treated in the ICU for acute lung injury.

Bienvenu and his team assessed participants at 3, 6, 12, and 24-month post ICU treatment, using the Hospital Anxiety and Depression Scale, anxiety and depression subscales, and the Impact of Event Scale-Revised.

This study found that more than half of the participants exhibited detectable symptoms in at least one area (general anxiety, depression, or PTSD symptoms) at a 2-year follow-up. A majority of these participants demonstrated co-occurrence of multiple symptoms.

You’ll also find this published in the May, 2015 issue of Critical Care Medicine.

Now, these studies raise interesting questions I’d like to see investigated further. In particular, I’d be interested in learning whether participants were responding to their experience in the ICU or the life-threatening event that put them there originally (having ovarian cancer, for instance).

As a community, we need to be mindful of possible mental health issues resulting from injury, illness, and the medical interventions used to treat them. There may be a substantial group of patients who aren’t receiving the psychological support that they need.

What interventions would you suggest to decrease PTSD symptoms for patients undergoing treatment for serious injury or illness? Please leave a comment below.