Many of us look back at our teenage years and realize that while often turbulent, these years laid the groundwork for who we are today. We learned incredible amounts of information, not just in terms of academics but also in terms of who we were as individuals.

But why were these years so turbulent?

At the time that I was living it, I felt that my parents seemed a big part of my teenage angst. Why couldn’t they just let me be me? Of course as I matured, this view has changed greatly.

Now I wonder if parents obtain sainthood when dealing with teenage behavior that mystifies the rational brain.

But after reading some new research, 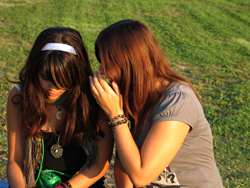 perhaps the behavior isn’t so mysterious… Frances Jensen is an epilepsy expert at Harvard Medical School and Children’s Hospital Boston, who recently shifted her attention to look at the teenage brain. What did she find?

It is different from ours.

Teens have fast growing synapses, but also parts of the brain that aren’t yet fully connected. The frontal lobes are the part of the brain that deals with cognitive functions, such as reasoning, planning and judgment.

Teenagers do not yet have fully connected frontal lobes, which mean that while they can use the frontal lobes, the access is going to be slower. Teens don’t have as much myelin (fatty coating) on their nerve cells, which causes these slow connections. The myelin insulation won’t be complete until they reach their late 20s.

This helps to explain why parents complain that their teens can be self-centered. Thinking about the effects of actions requires insight, which generally comes from a fully-connected frontal lobe.

That doesn’t mean that our teens are inherently thought-less, selfish creatures. Just that it takes more effort on their brain’s part to think through consequences.

What else do we know about the teenage brain?

Neural networks (allowing neurons to communicate through chemical channels) are enlarging in teens. This evolutionary biology has made adolescent brains more excitable so that they can learn more easily, but it also means that they are more vulnerable to external stressors like drugs.

So next time that your teen drives you to distraction, realize that their brains are functioning in a different way than ours.