Whether it’s being picked last for softball after school or not getting invited to an important social gathering, being left out can cause a lot of emotional pain.

But what can you do about it? It’s just part of life, right?

That answer wasn’t good enough for Dr. Paolo Riva and his colleagues at the University of Milano-Bicocca in Italy. They wanted to see whether there was a way to change the brain to alleviate the pain caused by exclusion.

In particular, they hypothesized that specific regions of the brain might be able to “buffer” against social pain. In order to test this, they recruited 79 university students and randomly assigned them to either a treatment or a control group.

Researchers told the students they were about to participate in a “mental visualization exercise,” during which they would receive electrical stimulation across the right ventrolateral prefrontal cortex (rVLPFC) for 15 minutes.

Only students in the treatment group actually received the current, however.

Five minutes before the end of the stimulation session, both groups played a virtual ball-tossing game. They were told they were playing with other people, taking turns throwing the ball to each other.

In fact, the other participants in the game were controlled by a computer, which was designed to exclude some players at random. So, when each student was playing their game, some received the ball their fair share, while others got it only once.

How your brain processes negative experiences can significantly affect how much pain they cause. Click To Tweet

After the game, students reported the percentage of throws they thought they received, and how much their feelings were hurt during the game.

The results led to some interesting conclusions.

This research is interesting because it reinforces the point that negative experiences alone aren’t enough to bother us. It’s how our brain handles those experiences that matters.

That’s why it’s important to do everything we can to rewire our brains for emotional health. While this intervention might be of limited use to practitioners who don’t have an electrical stimulation device, it’s still a promising step.

And at the least, it’s proof of a very important truth – how we process painful experiences affects how much we suffer from them. 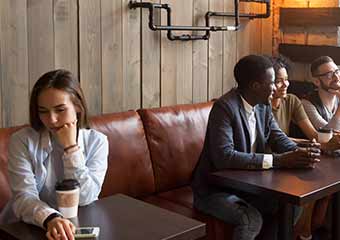 This research shows the potential for brain science to change the way we handle negative experiences. That in itself might be useful to tell your patients.

If you want to improve the brain’s ability to handle life’s experiences (both positive and negative), take a look at this.

Have you ever worked with a client who suffered from feelings of social exclusion? What interventions did you suggest? Were they effective? Share your thoughts in the comments below.