When a busy day is done, and you’re finally tucked in bed and fast asleep, your brain gets a break from that seemingly endless daily barrage of stimulation.

For researchers at the University of Wisconsin-Madison, that made for an ideal opportunity to take a look at brain waves in their most natural, uninfluenced state.

They wanted to find out if long-term meditation could increase gamma power.

Basically, gamma is a pattern of brain waves that’s usually associated with perception and consciousness – as well as some plasticity-related processes like attention, learning, and memory.

Under the guidance of psychiatrist and neuroscientist Giulio Tononi, MD, PhD, Fabio Ferrarelli and colleagues worked overnight using high-density electroencephalography (hdEEG) to compare the brains of long-term meditators (LTM) with those of folks who had never meditated.

They recruited 29 right-handed LTM participants and the same number of non-meditators, matching for age and sex – all between their late 30s and early 60s.

The meditation group was made up of folks who had been practicing for at least 3 years, and had also participated in at least 3 one-week intensive retreats.

Each participant was recorded all night using high-density EEG, and for an added control, the sleep technician was blind to group assignment.

After a lot of long nights, and thanks to a few pieces of hi-tech equipment, the researchers had some exciting data to show.
Compared to the non-meditators, the LTM group had significantly increased gamma brain waves. 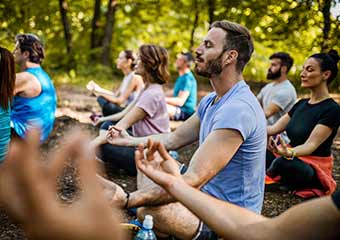 What’s cool is that these waves have also been linked with increased compassion, happiness, and optimal brain function, and are often used as a measure of lasting brain change.

While we can’t draw too many conclusions from the experiment because it wasn’t randomized, these findings add to the growing body of evidence that meditation can change the brain.

Our webinar series on Practical Brain Science is chock-full of strategies you can use to change the brain. Click here to sign up.

And now, I’d like to hear from you. Are you using meditation to improve the way your brain works? Have you suggested it to a client to help them enhance cognitive function, or create brain change? Please leave a comment below.